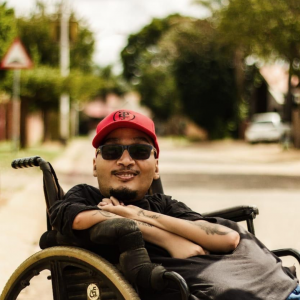 His first hurdle was self-acceptance. As a loner, this was something he coped with by expressing his emotions on paper.

Jonathan’s frustrations and anger at his situation permeate his early contributions to rap and poetry.

However, over time he learned to channel his passion for writing in a more positive way, and 2J Harmonix was revealed to the world. “I’m unstoppable” is a sentiment that he has claimed as his own.

National recognition has seen the wheelchair-user rap artist perform at Africa’s biggest hip-hop festival, back to the City, and at the iStart2Sing Music and Arts Festival. He has been interviewed on numerous television and radio talk shows and has performed at the Urban Soul Poetry Slam. In-depth interviews have appeared in a slew of print media, from daily tabloids to consumer magazines.

Using all public platforms at his disposal, he continues to share his messages with the world – and they’re never sugar coated. Through his powerful lyrics and motivational talks, he exposes life as a disabled artist and the constant battle to overcome stigma and adversity. He advocates drug-free youth and good parenting principles, has released a number of CDs and is an ambassador for the Casual Day fundraising campaign for Persons with Disabilities.

His attitude to life is best expressed in this quote: “If the sky is the limit, the sun better give me space.”

Casual Day is a fundraising and awareness project of the NCPD in support of Persons with Disabilities.